Some artists play it safe, staying clear of imagery that is confronting. Better to play it safe and build your Instagram followers amongst the beige hoards who spend their weekends snapchatting pictures of their junk to everyone in their phonebook (hey, it’s Wednesday – I’m allowed to be cynical – it’s the rules… that I just made up). This seemingly never-ending embrace of risk-aversion is what made John Brophy’s work immediately stand out. Youthful girls, falling foul of their attire or crowned in astronaut helmets, stare fascinated off into the distance while complex equations dance round their heads. The swastika adorns some, a symbol formerly innocent itself corrupted and demonised because some cocaine and opium addicted, tiny moustached loser with an inferiority complex and decided to take it out on the rest of the world and killed a bunch of innocents (the dickhead). Its symbolism here is perfect. As is the play of light from above that illuminates many of his works. Corruption sanctioned by the ‘Creator’ on high. Blessed and bathed in his light. .. OK I’m getting quite philosophical here so I’ll quit while I’m ahead….

After studying art history and becoming increasingly dissatisfied with simply being a fan of other artists, John worked his arse off and through sheer bloody mindedness taught himself how to paint. What a bloody mind he must have! John currently lives in Seattle, USA. 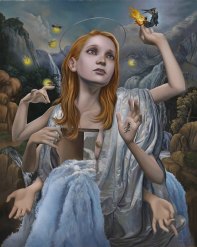 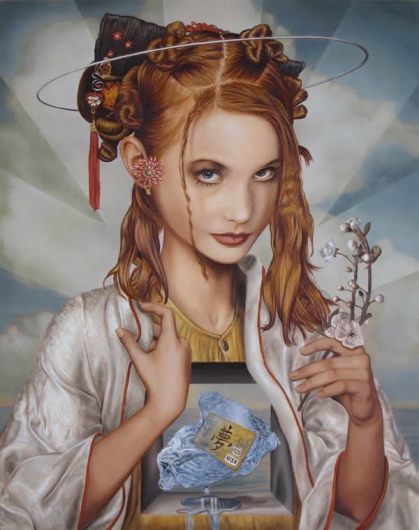